I was approached to get involved with the Naval Heritage Trust when Digest no 4 was ready to be published and the Trust needed some sponsorship to fund the printing. The most famous South African in the Royal Navy was Sir Neville Syfret, and I was the Business Development Manager at Syfrets Trust Ltd at the time. It seemed like a good partnership.

I was invited to meet the trustees and I found myself surrounded by Admirals and Commanders. For someone who had only been a very junior rating in the Navy Gym, had never spoken to a senior officer and had never risen above the rank of Able Seaman, this was a terrifying experience. All I knew was that I needed to salute everyone in the room. But I found them all welcoming and tolerant of my ignorance.

A couple of years later, when Charles Bates decided to step down as Chairman, my name was put forward as his successor. I was horrified, believing myself to be unqualified, unprepared and unready for the task. Adm Bennett – or Chris as he was known to me – reassured me that he supported the selection and promised me his fullest cooperation as deputy Chairman. 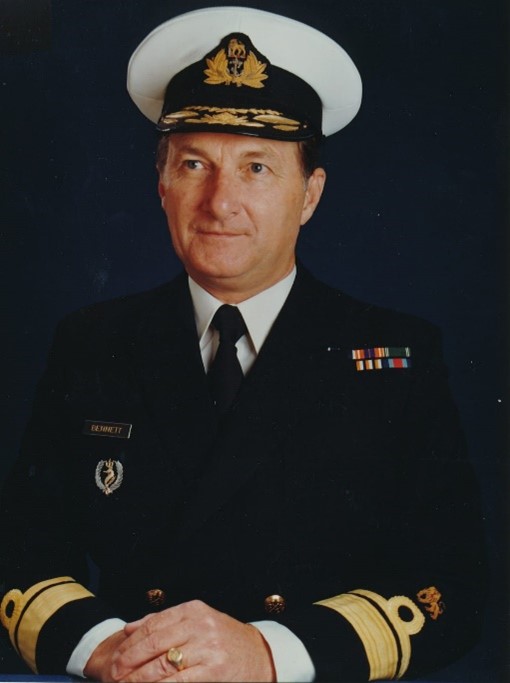 For several years I used to give Chris a lift home after our executive committee meetings, and it was on those drives over Ou Kaapseweg that I learned what a fine friend he was. There was nothing that I could not ask him: about naval terminology, naval traditions, naval history and, even more importantly, naval relationships. When I didn’t know the intricacies of a situation, he would gently explain the delicacies of the interaction.  He gave me full rein, allowing me to learn from misjudgements but never putting the reputation of the Trust at risk.

For all the years that he edited our Digests, he always asked for suggestions and comments. He learned new techniques of printing and publishing and if I queried anything, he would explain his choice of wording, pictures, size, colour and even printing volume.

He never once made me feel that I was a fool, although on many occasions he must have wondered what on earth I was doing. He treated me as his commanding officer, which terrified me but taught me that having a loyal crew makes you invincible.

I will miss Chris in so many ways. I often quote him to friends, and I will continue to do so because his lessons were life lessons. He showed me how a gentleman behaves. How the finest of men are humble, willing to learn and that to be part of a team is to make the sum of the whole so much greater.

Farewell, Chris. It was a privilege to know you.

Christopher Hart Bennett was born in Que-Que in the then Southern Rhodesia on 8 December 1937 shortly before his family moved back to South Africa and he grew up in central Natal before matriculating at Kingswood College in Grahamstown in 1955. Although he had planned to study architecture, he applied to spend a year in the Naval Gymnasium in Saldanha and once there decided that his future lay in a career in the SA Navy.

Accepted for officer training, he was one of five Midshipmen to do a degree course through the Military Academy, then still in Stellenbosch but which was later moved to Saldana where he completed his B.Sc. (B.Mil) and was commissioned as a Sub Lieutenant in December 1959. Appointed to the frigate SAS Vrystaat, he served under the legendary Capt M.R. Terry-Lloyd and later Capt John Fairbairn during which time the ship represented South Africa in the quincentenary commemoration of the death of Prince Henry the Navigator on the River Tagus in Portugal. The following year saw him serving in Seaward Defence Vessels where, with his experience in Vrystaat, he gained his Bridge Watch keeping Certificate and was promoted Lieutenant in 1961.

After completing the Lieutenants Qualifying course the next year, he was appointed to the frigate SAS Good Hope as the Anti-Submarine Warfare Officer where he proved his worth and in early 1963 was sent to HMS Vernon the specialist school in Portsmouth to do the 11 month RN Long Torpedo Anti- Submarine (TAS) course which included qualifying as a ship’s diver. His next appointment was TAS officer in the new frigate SAS President Kruger where CAPEX64 tested his new specialisation to the full and at the end of 1964 he was appointed Officer in Charge of the TAS School in East Yard, Simon’s Town.

This appointment allowed him the stability and opportunity to finally get spliced to Meg Brereton- Styles who he had been courting in between his absences at sea and appointments overseas since December 1960. Their wedding in early 1965 coincided with his appointment as TAS officer in SAS President Pretorius.

In early 1967 he was appointed in command of the minesweeper SAS Johannesburg and later of SAS Mosselbaai with a trip to Luanda, broadening his command experience considerably before a well-earned break ashore in mid-1968 at the training unit SAS Simonsberg and later promotion to Commander, followed by an appointment as Staff Officer TAS at Naval HQ (NHQ) in Simon’s Town.

November 1971 saw the family depart for London on his appointment as Naval Attaché in the UK, a post which he filled very professionally at a time under the premiership of Harold Wilson which saw the decline of naval cooperation with the RN and his attempts on return to South Africa to warn the Navy of the coming complete break in traditional naval ties fell on deaf ears.

Appointed to Naval Operations Command on his return, he was the first in the Navy to become aware of Operation Savannah in Angola and was heavily involved in the initial naval contribution, including the extraction by SAS President Steyn of army personnel cut off to the north of Luanda

Promoted to Captain in January 1976, he was appointed in command of the submarine base SAS Drommedaris, renamed Hugo Biermann during his watch, before an appointment as Senior Director in the Naval Personnel Division at NHQ (SMST), overseeing the move to Pretoria and being one of the first to move and later becoming Acing CNSP. At the end of 1979 he was appointed to Defence HQ as SSO Strategy (Navy) and in April 1982 was promoted to Commodore and took over as Director Strategic Studies.

In early 1983 he was back at NHQ as Director Naval Operations at a time when the Navy was heavily involved in support of Special Forces maritime operations and he was responsible for providing the necessary forces. He also accompanied a strike craft on one of the operations to get a better understanding of the tasks they undertook. During this time he implemented a new series of Naval Orders which had to be evaluated and reissued every three years to ensure they remained valid as well as reviewed the requirements for BWC and introduced logbooks for Officers of the Watch and a number of other innovations.

In 1985 the Navy decided to do away with its mixed command structure and disband the three functional commands (Operations, Logistics and Training) and the three area commands (Cape, Natal and SWA) and incorporate them in two regional command COMNAVVWEST and a much smaller COMNAVEAST. Thus in January 1986, now a RAdm, he was appointed as COMNAVWEST with this important task and ’Wiggy’s Western Wonders’ was born – Wiggy being the traditional RN nickname for a Bennett. Three other major achievements during his time in command and for which he was responsible were the ALL Service Presidential parade and naval sail past in Sea Point on 06 April 1987, the first ever Presidential Fleet Review during the Diaz Festival (500th Anniversary of his landing) in Mossel Bay and Exercise Magersfontein. The latter was the largest ever naval exercise and demonstration of fire power and capability conducted by the SA Navy with every operational vessel participating and probably hastened the Cuban decision to enter negotiations to end the war in Angola.

January 1989 saw him back in Pretoria in the post of Chief of Naval Staff and the beginning of a stressful period for him as it included cutting the navy personnel strength by over 20% as well as the planned closure of all naval bases other than Simon’s Town, although he was able to motivate the retention, albeit at reduced capability, of Durban. It, however, soon became apparent that with his lack of ‘political’ support at ministerial level, two changes of the guard (CNavy) and finally being superseded, he had little option but to retire. After a fulfilling career of nearly 34 years in the Navy he retired in November 1990

Having been dedicated to the Navy and its affairs for so long, he found it difficult to compete in the business world, largely due to his high rank which made it harder to start at a lower level but finally found an outlet for his creativity and naval experience in writing, a field he had not previously enjoyed but, with advent of word processors and personal computers, one he quickly excelled in. From a short fortnightly column in the Pretoria News on Defence matters, he advanced to the writing of defence papers for the Institute for Security Studies and after being appointed as a Trustee of the Naval Heritage Trust a number of books including the definitive record of the President class frigates, Three Frigates and a plethora of Naval Digests and general naval articles in other journals.

Notwithstanding the disappointing end to his career, he was always ready to put pen to paper when the Navy was maligned or misreported and his letters in the Press were always convincing and quickly established him as a knowledgeable and respected naval expert. He was the most respected member of the Naval Heritage Trust (NHT) board and until retiring due to pressing personal responsibilities, was the guiding light and a mentor to most. He was unanimously elected as President of the NHT shortly before he passed away but, sadly, before he could be informed. His unexpected passing on 17 August 2021 after being admitted to hospital and showing slow progress, was a shock to all and he will be sorely missed by all, but his legacy will live on in his writings. He is survived by his wife Meg and three sons, Granger, Digby and Thomas and their families.