To order please either email or use the contact form. 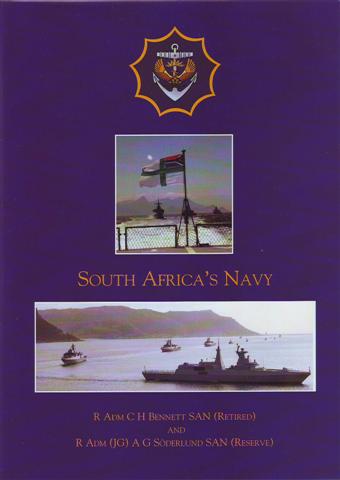 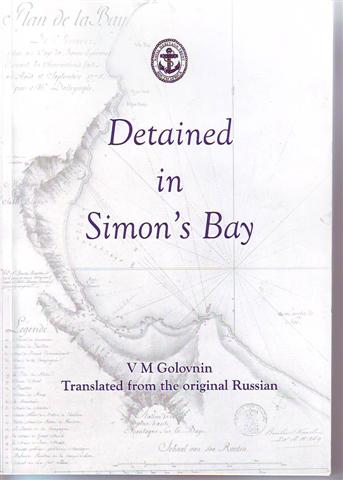 Translated by Lisa Millner Published: 2009
A translation of the section of a report to the Imperial Russian Navy covering the year May 1808 to May 1809 during which the Russian sloop Diana was detained
in Simon’s Bay by the Royal Navy. Covers not only the naval aspects but also provides a fascinating insight into life in the Cape Colony in that era.
Soft cover, A5, 108 pages.
Member price R50.00
Retail price R95.00 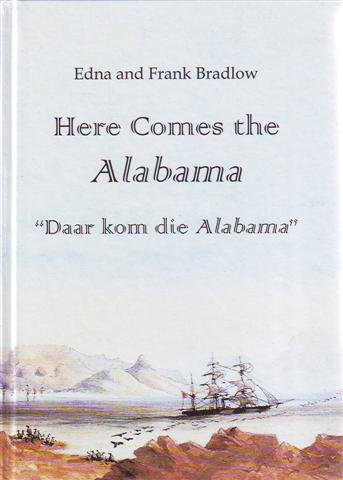 By Edna and Frank Bradlow
Published: 2007
This is a second edition and updated version of the book. The book tells the story of the Confederate Raider Alabama from her first day at sea until her final battle with USS Kearsage off Cherbourg, France Hard cover, 162 pages in full colour.
Member price R50.00
Retail price R100.00

Seaman Gunner Do Not Weep 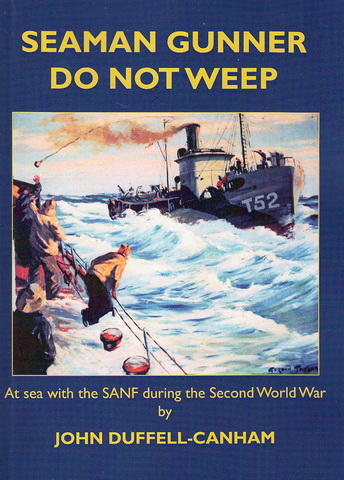 In writing his manuscript in 1984, nearly 40 years after the end of the War, the author deliberately tells it in the third person in order to make it a story rather than a dry formal history. This also enables him to tell the stories of other SANF ratings as if they were the same person. This is therefore in its way a unique book in that it tells not only John Duffell-Canahm’s story, but also some of the experiences of others who served in the Mediterranean Theatre during that war. The modern reader thus gets a fascinating insight into the life and hardships faced by our sailors who served
on South Africa’s small ships during the war. In some ways this is also the heartwarming story of Maria Xanthopoulou, a young girl of Piraeus, Greece, to whom the author has dedicated his book.
Soft cover A5 size 332 pages.
Member price R130.00
Retail price R190.00 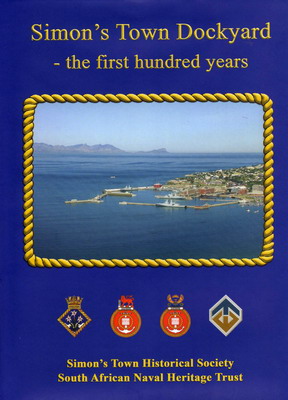 The history of the East Dockyard is intertwined with that of the town and whilst a number of books have been written on the town, we at last have the picture from behind the Dockyard wall, and a fascinating one it is. The residents of Simon’s Town in those days were certainly a lot more fore-bearing than those of today, and especially so during the actual construction period when buildings reverberated to explosions, rocks periodically fell through their roofs and dust pervaded the whole town.
Member price R250.00
Retail price R300.00 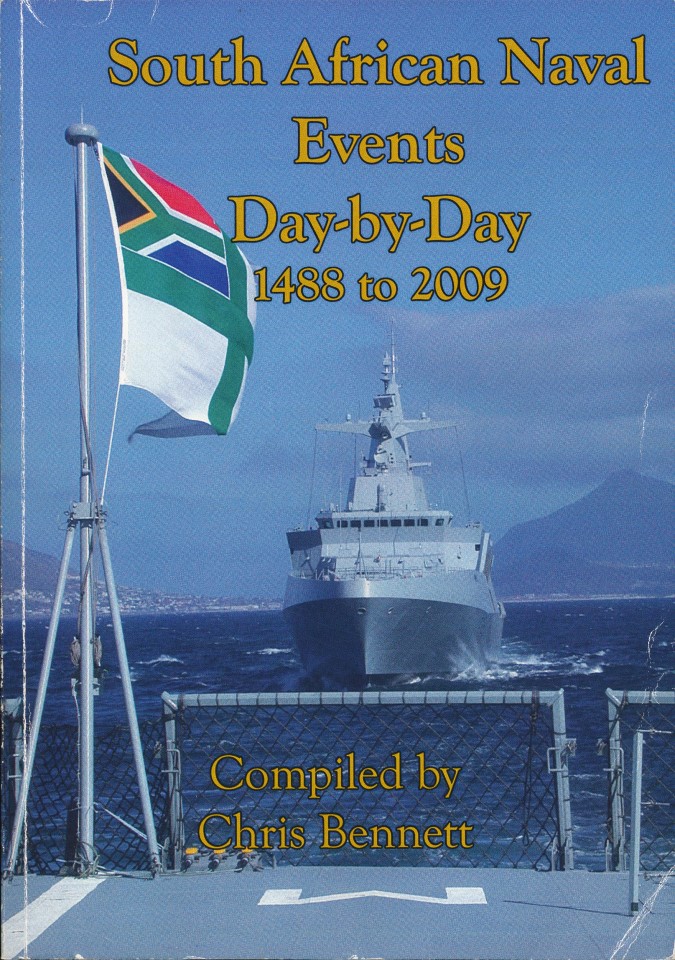 This book was conceived after the Author read the book The Royal Navy Day-by-Day. Although the South African Navy is very youthful compared to the Royal Navy having only been in existence for some 80 years, the fact of being on the Cape Sea Route has given South Africa a rich maritime/naval heritage. Yet it is surprising how little of this heritage South Africans in general seem to be aware of. Although not yet a page per day it is surprising how many events of naval importance exist in South Africa’s recorded history, incidents that many ask about but only a few can answer with any detail. This book provides much of that sought after information and to aid researchers also has three indexes: the first an annualized index; the second an index by type of incident; and the third an index of ship names. Capt Glen Knox posts the daily entries from this book on his Facebook Page: [SA Naval Museum] Day-by- Day in the SA Navy.
Soft cover A5 size 240 pages.
Member price R60.00
Retail price R80.00

No Reward for Duty 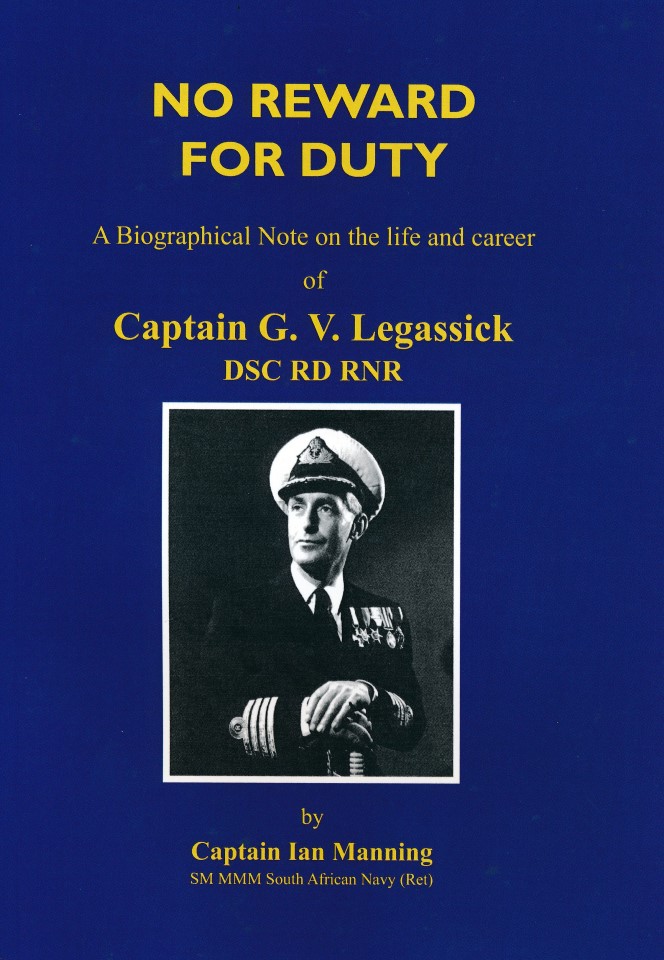 A Biographical Note on the life and career of Captain G.V. Legassick DSC RD RNR. Ian Manning’s meticulously researched biography on this enigmatic man reveals for the first time the fullness of his life and the high aspirations he had for the South African Nautical College General Botha, an institution he served with uncommon zeal and vision. It also reveals more about the sly, contemptible and vindictive manner in which the Nationalist Government summarily fired him for no good reason.
Soft cover A5 size 290 pages.
Member price R130.00
Retail price R190.00 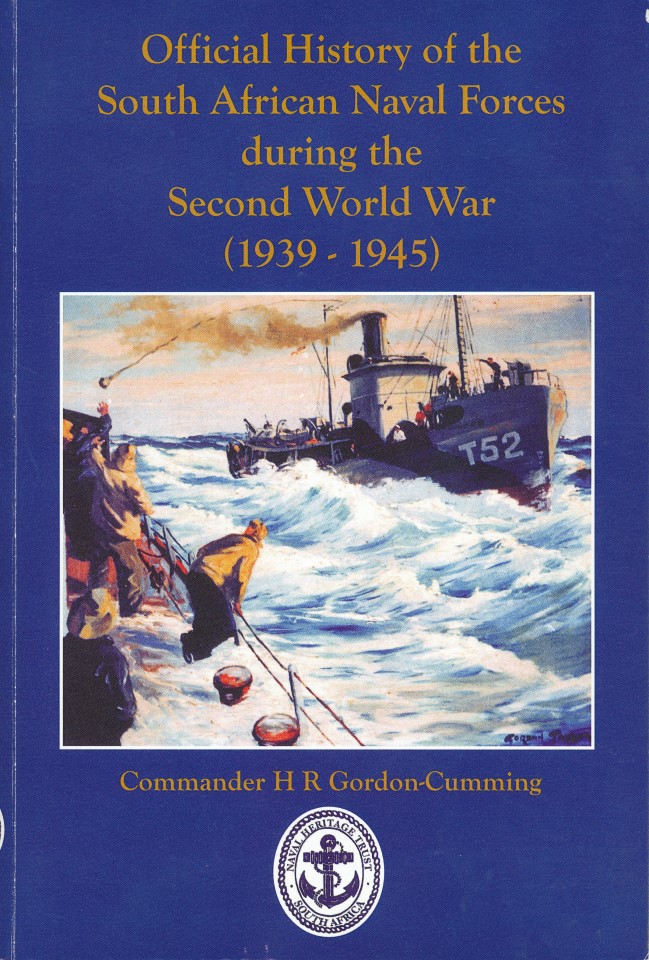 By Commander H R Gordon-Cumming.
A comprehensive history of the SANF during the Second World War. It was resurrected by the Naval Heritage Trust and eventually published in 2008.
Soft cover A4 size 372 pages.
Member price R150.00
Retail price R250.00

Concentrating on Robben Island but written against a background which covers in a small degree detail of all the other batteries on our coastline, the book tells of the Coast Gunners themselves, the intrepid women who operated the range finding and plotting instruments, the Woman’s Auxiliary Naval Service (Swans) who watched over the anti-submarine fixed defences; the men of the Seaward Defence Forces who manned the degaussing depot, and not least the untold story of the hundreds of Coloured anti-aircraft, coast gunners and infantrymen who were trained on the Island and either formed part of its defences, at a time when there was a serious threat of Japanese invasion or served ‘Up North’ with the South African forces in North Africa. Soft cover A4 size 366 pages.
Member price R150.00
Retail price R250.00

Under the White Ensign 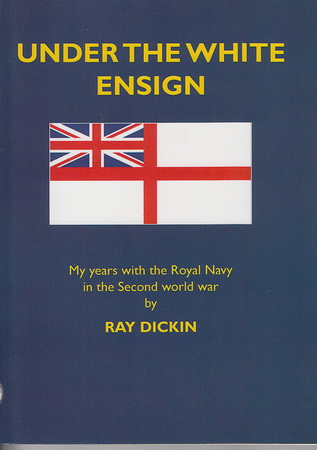 Wartime memoirs of Lieutenant R D Dickin covering his service in Royal Navy ships, from December 1939 until March 1946, mainly in the Mediterranean. In this time he served on a cruiser in the South Atlantic Ocean, an Armed Merchant Cruiser in the Indian Ocean, on an A/S trawler in the Red Sea and Mediterranean and thereafter in the Mediterranean on two corvettes, two destroyers and an LST. He saw service ashore in Athens during the Greek civil war after the retreat of the Axis forces. Soft cover A5 size 168 pages.
Member price R130.00
Retail price R190.00 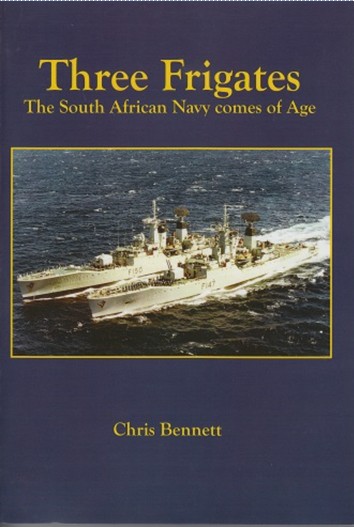 This book covers the story of the 3 South African Type 12 frigates named after South African Presidents, Kruger, Steyn and Pretorius, from the initial design selection in the mid 1950s to their disposal in the early 80s. [The Author] has used a blend ofofficial papers, Reports of Proceedings and anecdotes from those who served in the ships to produce a book that documents not just the story of the ships but also of the South African Navy during their service. Soft cover A4 size 294 pages.
Member price R150.00
Retail price R250.00 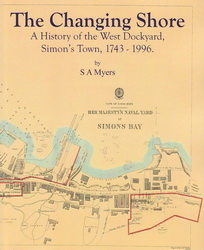 It was only in the 18th century that the Dutch settlers in the Cape first identified Simon’s Bay as a suitable sheltered anchorage for ships wishing to avoid the worst of the north westerly gales that pound the Cape in winter. Soon after the British occupation of the Cape in the early 19th century Simon’s Bay and the small village of Simon’s Town began to develop as a major naval port for the Royal Navy, to such an extent that by the mid 20th century Simon’s Town had become recognised as the major naval station of the Royal Navy in the southern hemisphere and was a name recognised widely in world naval circles. This development into a major naval port all began in the Simon’s Town West Dockyard where the Dutch VOC had built the first storehouses to support ships taking shelter in the bay. This is the story of the development of that Dockyard, the main base of the Royal Navy until the completion of the new East Dockyard in 1910.
This book tells the fascinating story of that first naval dockyard in South Africa. Soft cover A4 size 294 pages.
Member price R150.00
Retail price R250.00 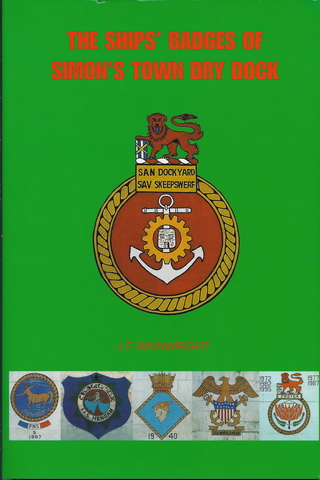 This fascination book is an almost complete record of the badges of all the ships that have spent time in the Selbourne Dry Dock in Simon’s Town. Traditionally ships that come into the Dry Dock paint their ship’s badges on the wall and touch up one other. The dockyard has maintained this unique collection to this day. It is more than likely the only Dry Dock in the world where this is still being done. The author, John Wainwright, has made an accurate recording of the over 137, as at the year 2000, of the ships and their badges that spent time on the Dry Dock.
Member price R90.00
Retail price R150.00

The Troopship Mendi - The Black Titanic 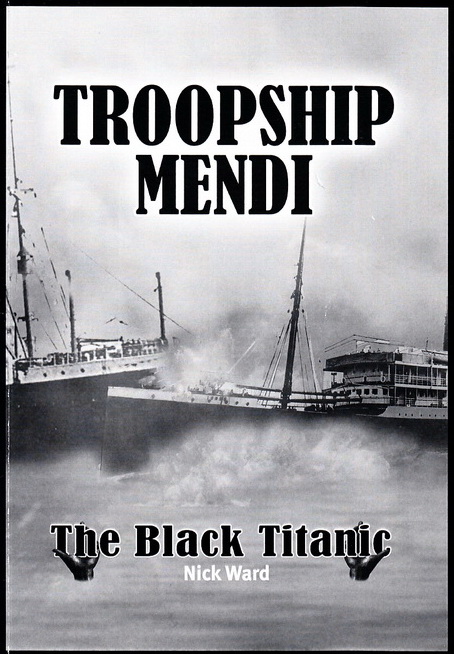 Millions of men were involved in the Great War and countless numbers remembered and honoured with pride around the world. However, my personal research shows that there are probably more souls forgotten because their stories have been lost in the fog of time, the 616 men of the south African native Labour Corps (SANLC) and the 30 crew who perished on the SS Mendi fall into that category.
Member price R100.00
Retail price R150.00 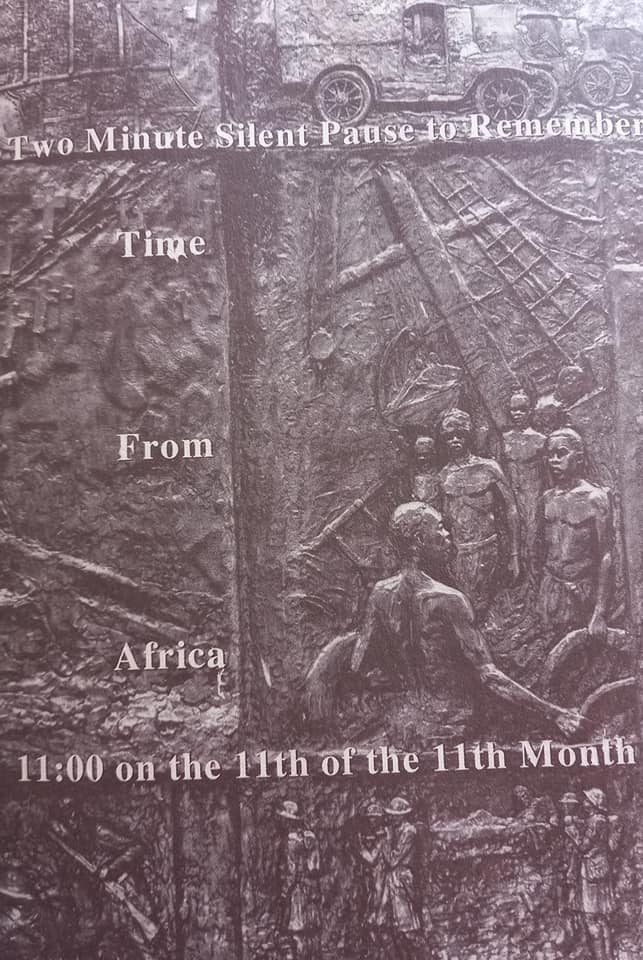 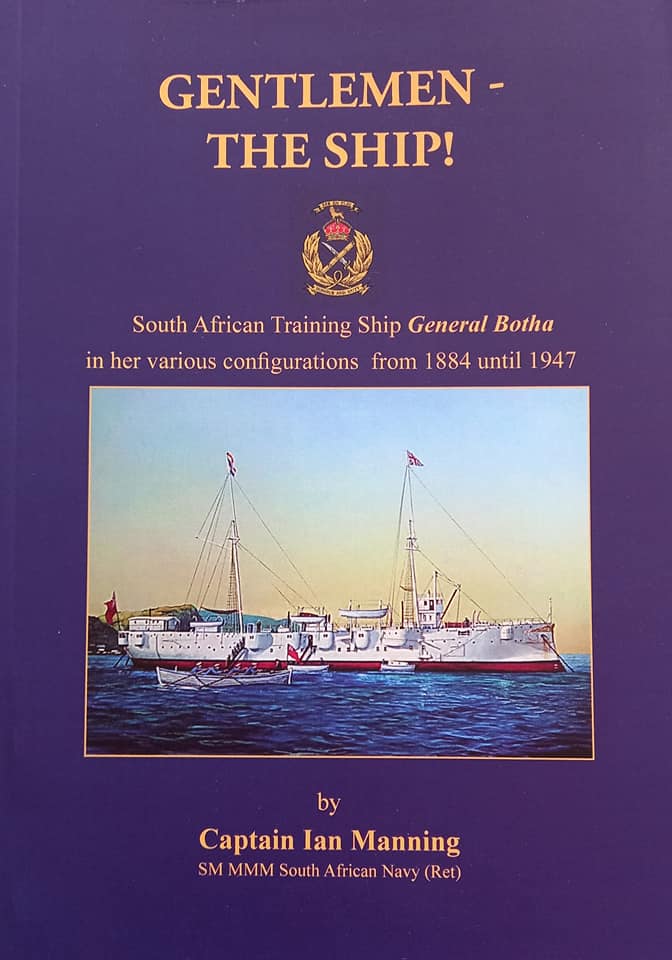 A Name Among Seafaring Men 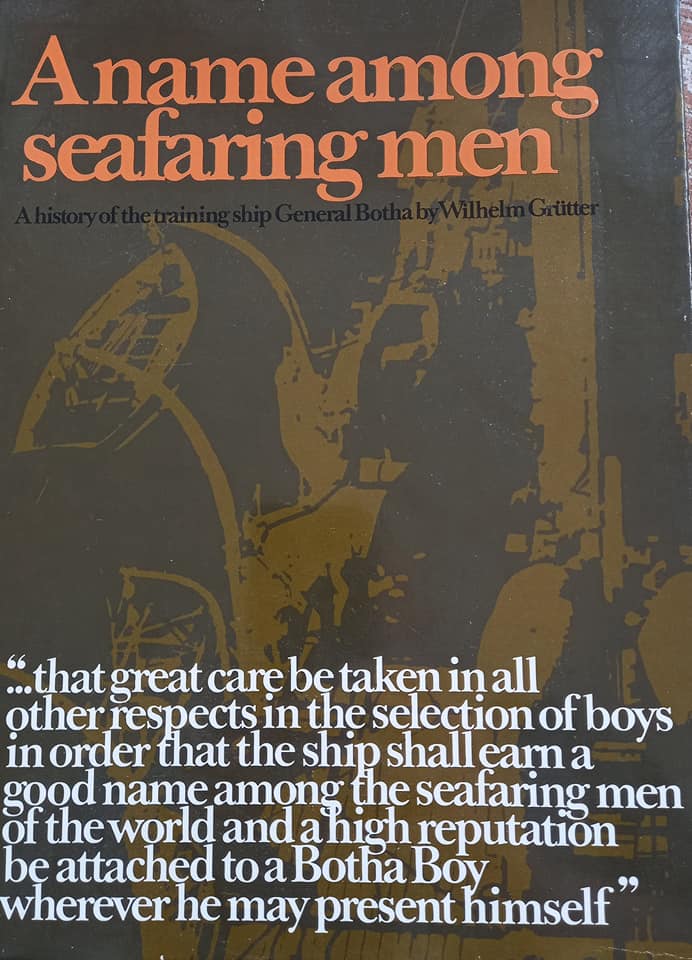 A history of the training ship General Botha by Wilhelm Grutter.

With more than 140 photographs, with perceptive research and with the affectionate memories of many of its veterans, these pages bring to life one of South Africa’s most remarkable training institutions – the General Botha.
Member price R25.00
Retail price R50.00

Iron Fist From the Sea 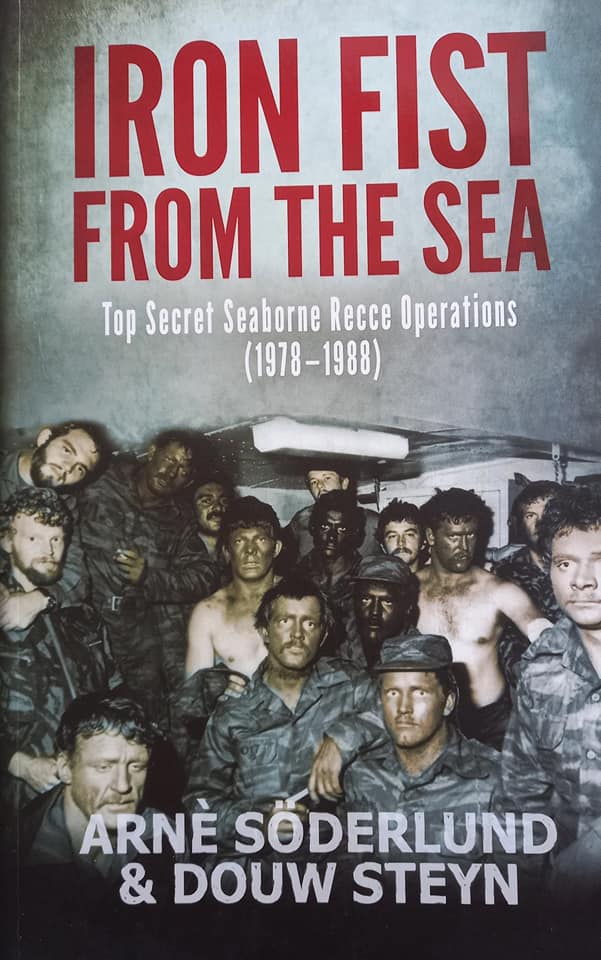 If you can Hold Up your Hand 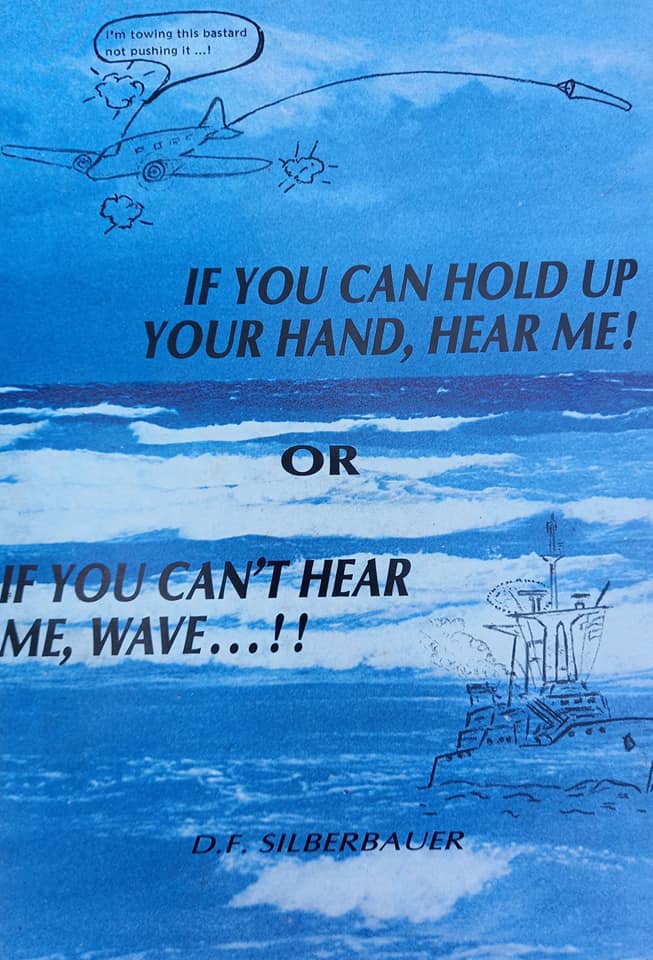 This booklet is not intended to contain all the funny stories that ever happened. Such efforts are usually singularly unfunny. It is just a gentle reminder that we’re all human despite almost daily indications to the contrary.
Member price R50.00
Retail price R70.00 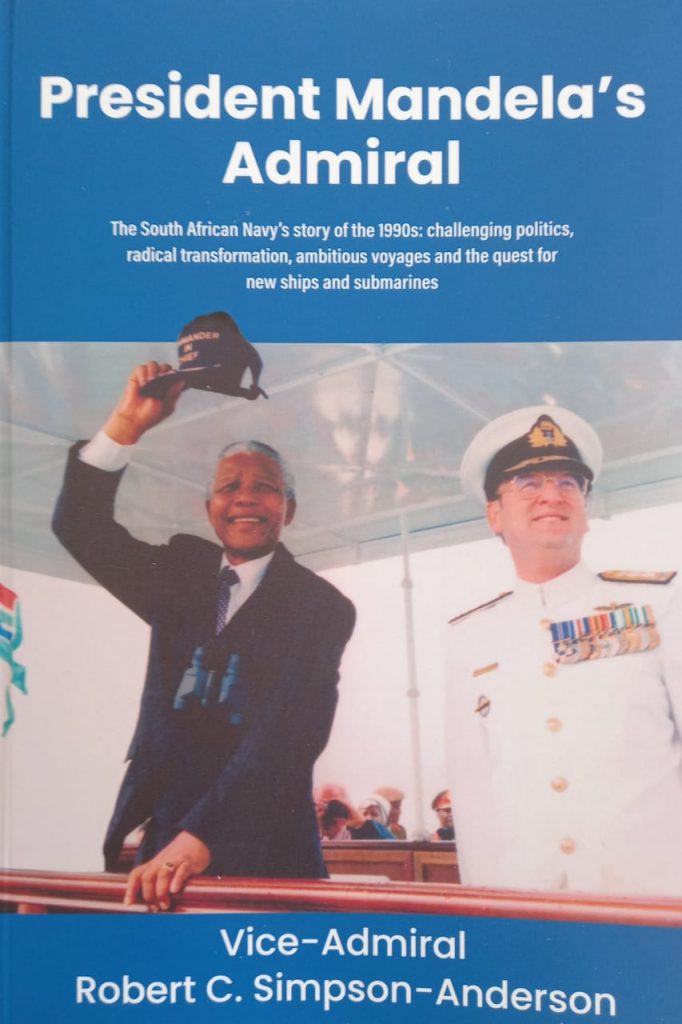 The South African Navy’s story of the 1990’s challenging politics, radical transformation, ambitious voyages and the quest for new ships and submarines. This is a first-hand account of the experiences of Vice-Admiral Robert Simpson-Anderson as Chief of the South African Navy from 1992 to 2000, a period of unprecedented political, social and structural changes in South Africa.
Member price R200.00
Retail price R250.00 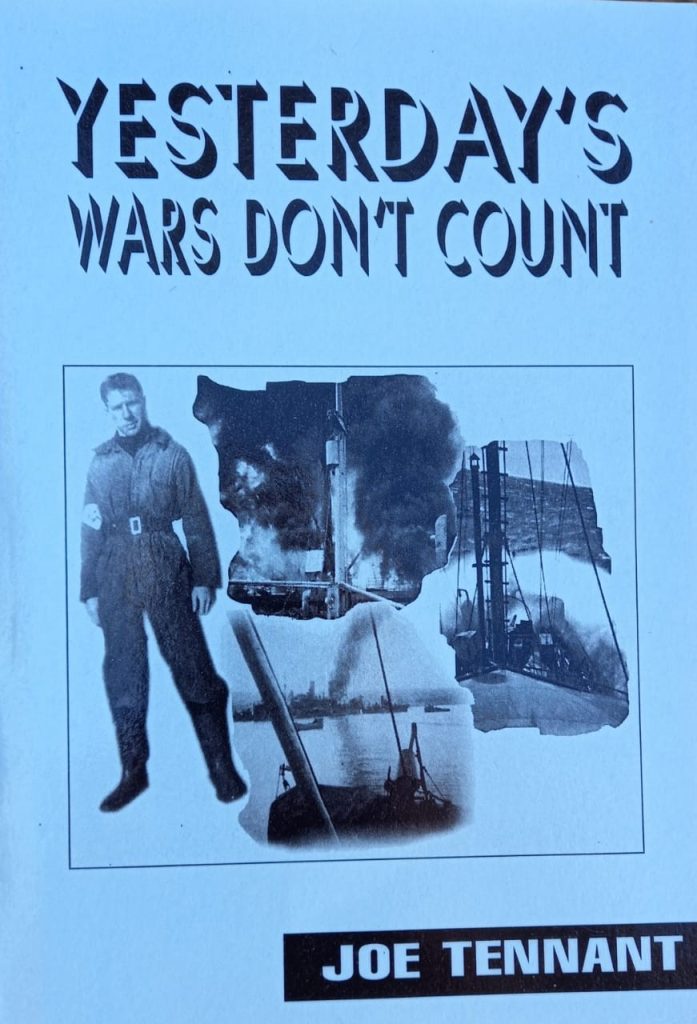 Yesterday’s Wars Don’t Count is a portrayal of the depth of determination developed by young men at war and how it is maintained on their return to civilian life in the peace which follows the end of World War II.
Member price R80.00
Retail price R100.00 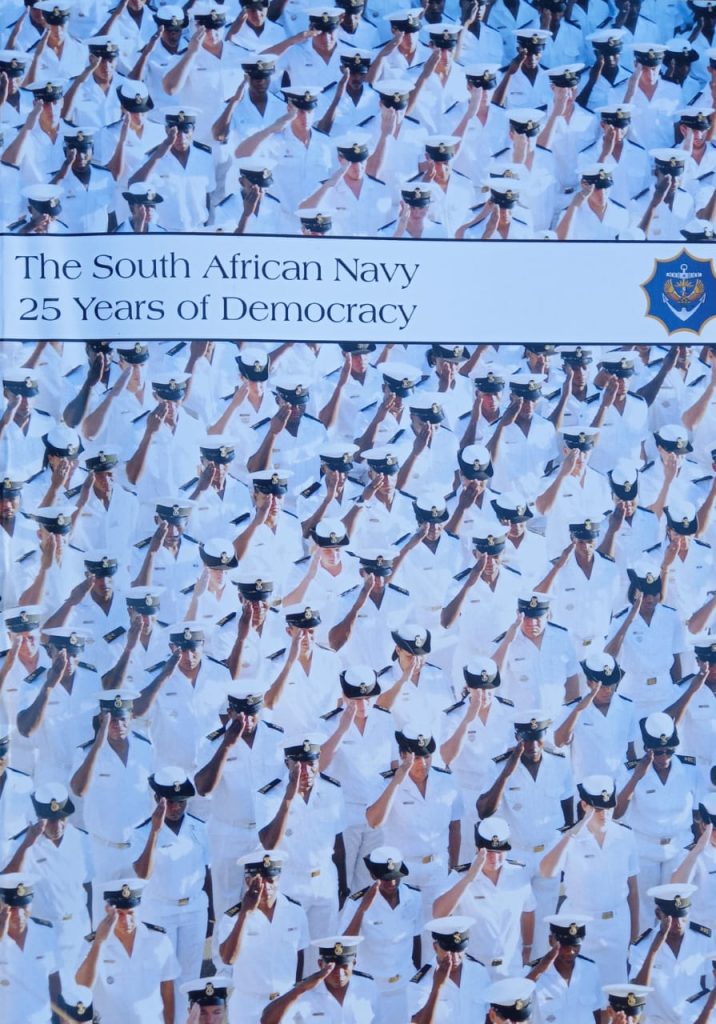 Postage on books ordered to SA addresses is normally R99.00. Postage to other countries on request. Indicate also that they can also be ordered by snail mail.

Note:
As all the above books are published on a ‘print on demand’ principle, if there are no stocks when an order is placed there will be a delay of approximately three weeks whilst new stock is being printed.